‘Less is More’ is what is perceived in today’s world the most. And the same philosophy has been seen in the evolution of UI Designs – User interface designs for applications on smart mobile phones over the last few years with the elimination of shadows and hard gradients in the designs. While creating the user interface, the basic goal is to make the user’s interaction as simple and efficient as possible with minimal amount of time spent by the user on the device in terms of accomplishing the goal. Thereby creating an excellent user experience.

To create a good user interface design for any product, it is essential that the designer has a good understanding of what the user needs. Once the user’s needs are clear, the designer can create an interface focusing on user interaction, while giving the application its own personality.

Listed below are the UI design trends 2016 we can look forward to in mobile app user interfaces to create an excellent user experience.

Simplicity is the key to creating a minimalistic design interface for an excellent user experience. To create a minimalistic design, ‘Flat design’ approach is most favoured as it gets rid of the unnecessary shadows, swirls, gradients and other unnecessary aesthetics, and offers a product focused platform with use of simple elements, typography and flat colours. The benefits of a flat design from designer perspective are that,

From a user perspective, Flat Designs are:

Flat design has all key attributes where the functionality and aesthetic are in complete harmony, creating an excellent user experience. So where can we expect it to go in the coming year?

It can be said that Flat designs will continue to be shaped by the other trends in mobile design. We can expect designers to create designs which have subtle textures in flat colour backgrounds and drop shadows or gradient which lean a little bit more towards skeuomorphism. Flat designs will also be used maximum in the wearable device interfaces, as flat aesthetics are particularly adaptable for the wearable devices and visually correlate.

Material design is one of the most influential visual philosophies in design world for mobile apps. It is closely related to Flat Design 2.0. The concept guidelines for Material Designs Lite have been created by Google in July 2015. It outlines details about the look and feel of an app, it’s working and other details like – animation, style, layout, patterns, and usability. This design concept has been developed from two basic elements – Flat designs and Layered Interfaces. The overall outcome when these two elements are merged is a clear design interface developed with the use of flat elements – colour, typography, icons and layering to create separations, instead of using textures, gradients, or strokes.

This design concept is preferred by the designers due it’s adaptable nature for any device in any situation. Providing the designers, a baseline to create layouts which are adaptive and responsive for various devices like – desktop, tablets and smartphone. Also the visual elements – colour palette and typography of material designs are borrowed from flat design concept. The Material Designs Lite version also helps designers create a unified app experience across Android and iOS platforms, so that the apps look, feel and function consistently regardless of device.

So within the Material Design, we can definitely expect the layer element to stick around for longer. The colour palette area will also be explored in the near future through the use of gradients and monochromatic colour layers which help in creating sharp elements which fit almost any type of content. Also most apps available now use light and white colour schemes, but the darker colours will soon emerge as well.

Gestures are the new clicks. Any app or tool one opens on the smart phone these days includes a tap, swipe or pinch to function. Gestures are primarily these hand movements, but can also include shaking, tilting, or moving the device. Some of the most common gestures are:

Due to these kind of hand movements aka gestures, it is difficult to separate gestures from animations as they pretty much go hand in hand. In the current designs for mobile interfaces, gestures are invariably linked to animations in mobile designs. The primary functions seen in mobile animations are:

Without animations, users wouldn’t have feedback informing them if they have successfully completed a gesture action. Hence it is inevitable to separate either, and easier to design an interface complementing both these elements than separating them.

In terms of benefits, gestures are preferred by the designers, as they pave the way in creating a beautiful interface where in the user’s actions can be hidden within the interface. On the user’s end they enable speed and are a comfortable way to interact with devices of any varying shapes and sizes.

So what can we expect more with gestures and animations in the near future?

Gestures are reaching its full potentials in terms of design interfaces, and are being integrated more fully with other design trends. We can expect more and more gestures over layers of animations, gestures (drag-and-drop) which would link one app to another. In the world of wearable devices, gestures can expand to include physical events. Eg: swing of arm to send a text or flick the wrist to send a call to voicemail. These gestures have been previously seen in some of the old devices as well.

Thus to sum up, we can definitely say that the layers and gestures are here to stay for longer. The other elements – colour palettes, and typography are the ones that would add variations and personality to the applications. 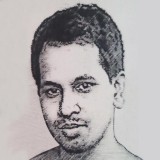 Multi-talented Project Manager and programmer, having worked on HTML, Actionscript, Android and Blackberry technologies, as well as design. Is passionate about mobile development and heads the mobile team at Qtech. A positive thinker with indomitable optimism and a will-do spirit. Is currently learning Swift. When he isn't researching on the latest in mobile technology, he hits the road on his Harley Davidson.